It’s all about space, making the most of what you have, to free your life of clutter and provide focus whether at home or work or in life in general! The benefits of decluttering a space, whether that’s a particular cupboard, a single room, or, ideally, your whole house, are extensive.

You’ll enjoy a sense of a new start with renewed focus afterwards, and it can be a vital step on the road to self-improvement and being the best in you can be in your life.

You should also feel more confident, happy and energised at the same time, and significantly less anxious. Your mind will be freer, too – having piles of clutter everywhere can cause emotional issues as well as being a physical nuisance.

Neuroscientists at Princeton University who studied people’s performance in an organised environment compared with a disorganised one found that the former boosts concentration and reduces stress.

There’s even some evidence that sleeping in a cluttered room can be much harder than dropping off in a clutter-free space.

One university in the US, UCLA, found a strong link between high levels of the stress hormone cortisol and a high density of household objects among female homeowners.

Some belongings may have bad memories associated with them and so drag you down emotionally – decluttering can be vital in helping you get rid of the past and move on.

So, ridding ourselves of unwanted junk can reap many benefits and make us feel more focused and happier. But how do you start? After all, letting go of belongings, some of which you may have had for years, isn’t always easy. Here are our five steps to living a more minimalist and therefore contented existence.

Freeing up space by reducing volumes of possessions is hugely valuable, physically and psychologically.

And decluttering isn’t just about throwing stuff away – it requires a rigorous and professional, yet also compassionate approach. It’s also become something of a hot topic in recent years, as we’ve grown more aware of excess spending and waste.

Do it little and often, not just if you’re downsizing or moving, or divorcing, or after someone has died.

It’s important to understand why you have allowed clutter to pile up in the first place. There could be any number of reasons, including, for example, feeling so overwhelmed by all your possessions that you are unsure of where even to start – it seems easier simply to ignore the problem. Or maybe you hang on to stuff and can’t bear to throw it out ‘just in case’ you may need it one day?

Equally, the cluttering could have got so bad that you even buy new things to replace items that you already own, just because you can’t find the original ones.

Whatever your reasons, try and identify it and which category of ‘clutterer’ you fall into, and get to the root causes of it before you do anything else.

2. Question yourself as you go through your things

Ask yourself whether you truly need each item as you go through your belongings. As a general rule of thumb, if something hasn’t been used for six months or a year, how likely is it that you will ever want to use or wear it again?

Alternatively, if something isn’t actually useful, it can nonetheless sometimes be worth keeping because it holds special sentimental value, or simply because you love it for its own sake. (But be sure that’s genuinely the case.)

Brace yourself to keep these questions in the front of your mind before you begin decluttering.

At the same time, ask yourself how you can overcome barriers to decluttering, which any of us may put up. These may include insisting to yourself that you need the thing you’re agonising over, or that someone else in your household may need or use it.

And remember, if you’re dithering, don’t forget to think of the benefits of having a clutter-free home will bring.

One trick – and a good way of being brutal with yourself – is to turn all your wardrobe hangers so they’re facing the same way. Replace hangers a different way when you’ve worn something, and, after several months, the garments which are hanging there unused and unloved will really stand out. The results may well surprise you. 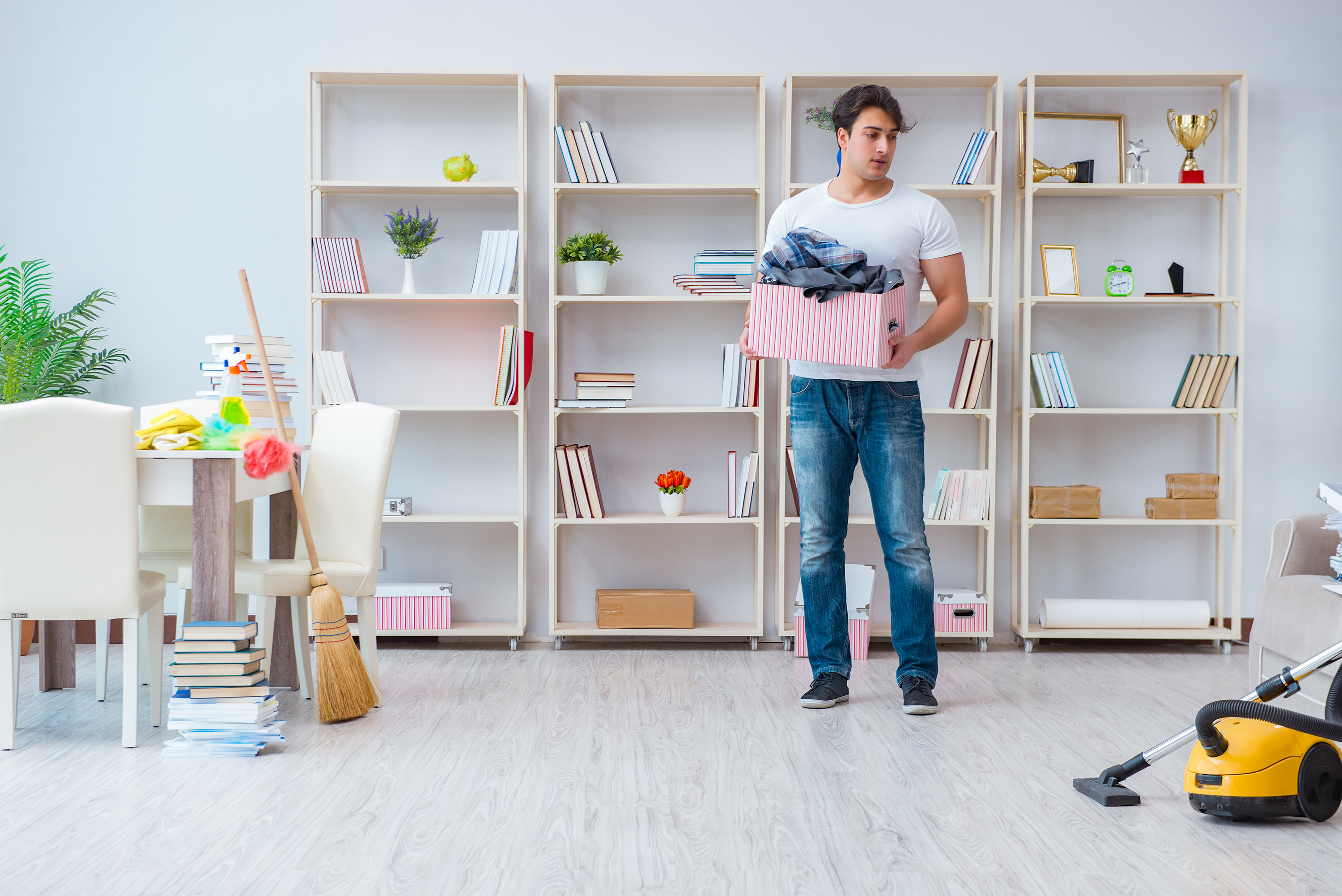 Another idea is to place all your kitchen utensils in a cardboard box. For a few weeks, place these back into the drawer individually as you remove them from the box to use them. Anything that remains in the box at the end of the experiment can be handed over to the charity shop.

As a final thought for this section, anything can be considered clutter if it doesn’t occupy a specific place when it’s not in use. After all, if you found a random fork in your bathroom or underneath the sofa, you wouldn’t think twice about returning it to its proper place – you’d know it didn’t belong where you found it.

This one may sound a little obvious, but you may find this exercise which you can do with a couple of rubbish bags really handy. That’s especially true if you feel so overwhelmed you’re not entirely sure where to begin.

Get two black bin bags, one for rubbish and the other for the charity shop or car boot sale, including items such as out-of-season clothes or garments which no longer fit, or books you’ve already read.

Spend 10 minutes a day going through perhaps one room a day – do this for one month and you’ll be on top of the clutter in your home before you know it!

4. Be brave in parting with unneeded ‘memory’ clutter

If something once had a special meaning to you, or was given as a present, it can feel extra hard to give it away. But if you don’t love it and haven’t used it at least once in the last year, do it. Recycle, give to someone else, donate it to a charity shop, or sell it online then donate the proceeds, but make sure you do part with it.

If someone has given you something you do want to hang on to, for example a bedside light that’s an upgrade of the one you have, give away the original.

If there’s something you’re really struggling to let go of, put it to one side for a few minutes and then look at it again and try and see it for what it really is – a jumper full of holes, say, rather than the sweater you wore on a first date with someone you went on to marry.

But the rule still applies, whatever the associations with the garment or other object. If you haven’t worn it, move on from it. Maybe there’s an old photo somewhere of you wearing the jumper, so that you can still remember? Or perhaps you just want to take a new one. Just because you’ve ditched the item, it doesn’t mean you also have to ditch the memory. 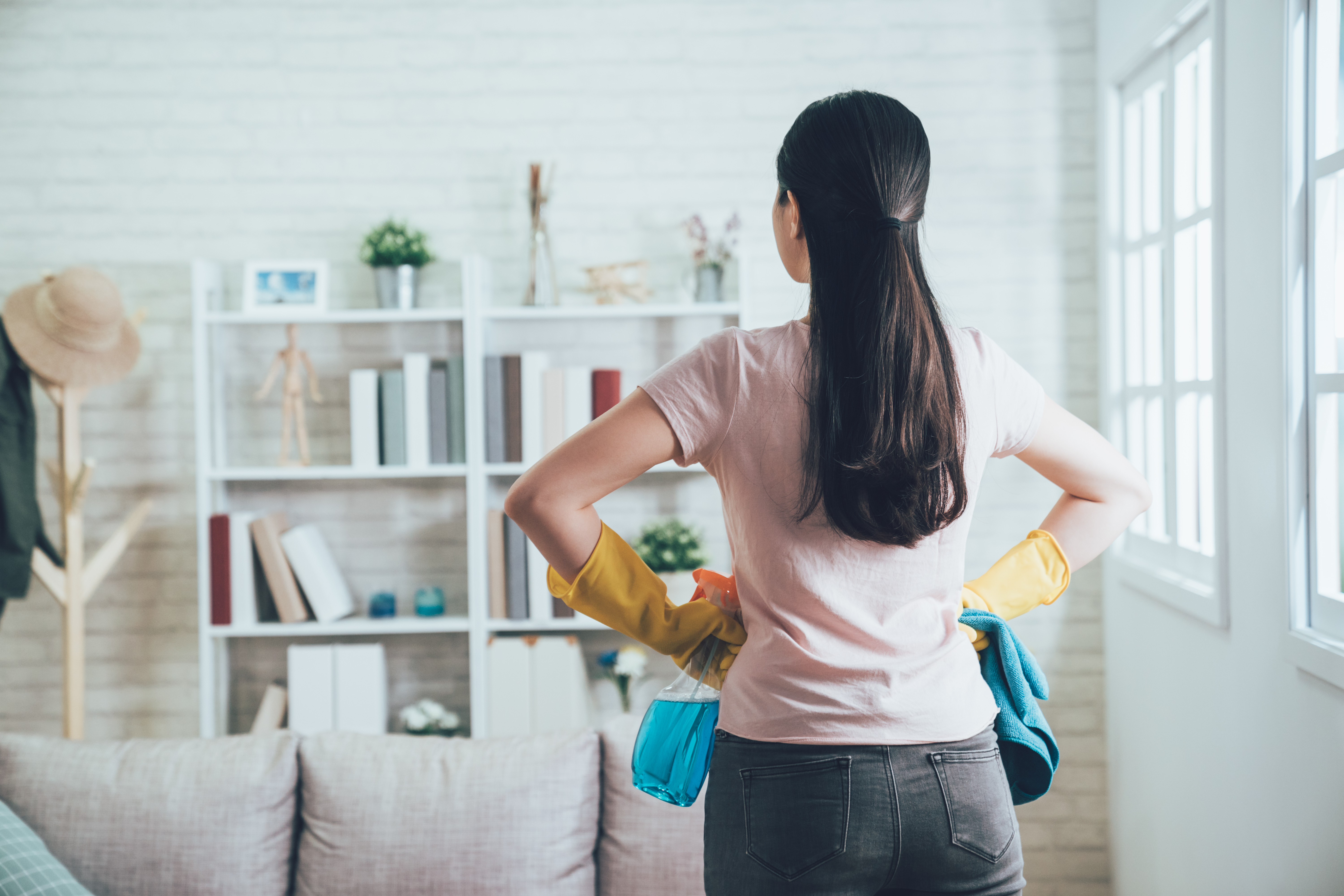 In any event, items with mixed or poor emotional associations particularly need to be binned.

It may be an idea to tidy non-sentimental items first. This gives you time to get your thoughts and emotions in order. Be brutal. If something doesn’t make you happy just by looking at it, it goes.

If you really want to keep a small number of items with strong emotional associations, make up a ‘memory box’ in a plastic container or old suitcase, and store it somewhere out of the way.

F is for FIX a time. Set aside a weekend afternoon, a week or a few evenings – however long it takes but put it in the diary and honour your commitment. If you live with other people, get everyone involved in the process.

A is for ANYTHING you haven’t used in a year. If 12 months have passed without you using something, how can you justify the space it takes up? Don’t just move stuff into another room. Think hard about when you last wore or used something and whether, realistically, you’ll ever use it again. Don’t keep on inventing excuses to keep stuff.

S is for SOMEONE else’s belongings. Your home should only contain your things. Borrowed something? Return it. Kids moved? Get them to collect your possessions. Divorcing? Your ex should remove their things.

T is for TRASH and it should be your friend. Get rid of it, you don’t have to put out as rubbish, recycle or donate where necessary, but don’t be afraid to let go.

With so many benefits to decluttering, you’ll wonder why you didn’t get stuck in sooner. Arguably the hardest part is just getting started and making the commitment to declutter in the first place. It’s an incredibly easy thing to put off with so much else competing for your attention. But take the plunge and you won’t regret it. It’s time to become the best you can be.

Do you have any tips for decluttering?